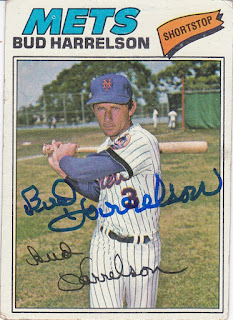 I got this card from an unlikely place. It came out of a repack box. It wasn't even your standard repack box with a mixture of somewhat recent packs mixed in with junk wax. It was one of those lots of a hundred random cards that you can get at Target. It probably isn't technically a repack box, but I don't know what else to call it.

Anyway, I was visiting my dad one day over the summer and he was proud to announce to me that he had got me some cards. I was curious to see which Topps brand he had bought me and then was a little disappointed when I saw what he had actually bought. I gave him a hard time about knowing better than to buy those things, but he didn't care. He was bored. So I flipped through all of the cards and it was mainly standard junk stuff. But I did come across one 1981 Donruss card and this card.

I was a little surprised to find a card from the '70s in the lot. It is not in great shape, but who cares. I was fairly certain that Bud was a good TTM signer, so I grabbed this card and the '81 Donruss card and brought them home. The rest of the 98 cards were left at my dad's house.

I sent this card to Bud in early November and I had it back ten days later.

Bud spent sixteen seasons in the Majors. He was mostly a Met, though he did also play for the Phillies and Rangers at the end of his career. He was a light-hitting, slick-fielding shortstop that played in two All Star Games and won one Gold Glove Award. He hit .236 for his career and tallied 7 home runs, the first of which was of the inside-the-park variety at Forbes Field in 1967.

Has anyone found any 2013 Topps in their neck of the woods yet? I haven't been to a card shop, but the two Wal-Marts I have been to did not have any.
at 1:49 PM

No 2013 cards at the Target in Linden NJ when I checked Friday evening.