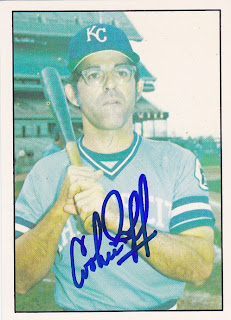 Here is the fourth and final Cookie Rojas card that I got signed at All Star Fanfest this past summer.

This is the first and only card from the SSPC set that I have got signed. I had hoped to get a couple more signed at Royals Fanfest this past weekend, but I failed to get a single card from the '70s signed.

I really know nothing about the SSPC set. But, a quick search on Baseballcardpedia did teach me some things. Apparently, these cards were not distributed in packs. Team sets were supposed to be sold in stores and complete sets could be ordered from a magazine called Collector's Quarterly for $9.99.

SSPC stands for the Sports Stars Publishing Co. and they were distributed by TCMA, who is more famous for the minor league sets they were making at the time. The cards are unlicensed and none of the players signed any releases for their images.

Before too many of these cards could be sold, Topps stepped in and sued the company. As a result, SSPC had to cease making and selling the cards and whatever inventory was on hand had to be disposed of. Yet, many cards did hit the market and they can be picked up fairly cheaply.

According to Baseballcardpedia, Keith Olbermann did all of the write-ups on the back of the 630 card set.
at 6:17 PM