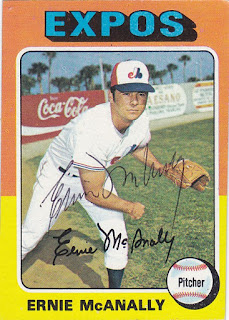 Here is another card that I unlocked in the Topps Diamond Giveaway. This one features the former Expo, Ernie McAnally. I sent this card to Ernie at the end of April last year and I got it back about eight days later.

Enrie (whose nickname appears to be Chili Mac) pitched in the Majors for four seasons in the early '70s, all with Montreal. He was used mainly as a starter and his career record is 30-49 with a 4.03 ERA. His best season was probably his rookie campaign in 1971. That was the only season that he ever reached double digits in wins as he finished 11-12 with eight complete games and two shutouts.

Ernie was sold to the Indians early in the 1975 season and appeared in one AAA game for them. He surrendered seven earned runs in two innings of work and then called it a career.

"Chili Mac" is an amazing nickname.

I totally agree, wondering where it came from. Can guess at the Mac part, but would like to hear the story behind it.