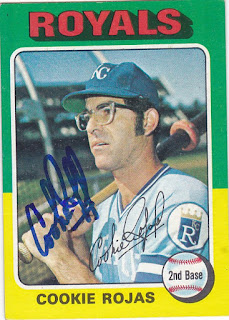 This is the third card that Cookie signed for me at All Star Game Fanfest this past summer. You can see the first card I posted here and the second one here.

Cookie managed the Angels in 1988. He led the team through 154 games to a 75-79 record before being replaced. He was included in the Topps Traded set that year, but I didn't realize that prior to Fanfest. So, I did not take the card with me to get signed.

Cookie also managed the Marlins for one game in 1996 as the interim manager. He won that game before the Marlins replaced him with John Boles.

Since leaving coaching after the 2002 season, Cookie has been employed by the Marlins as the teams color analyst for their Spanish-speaking TV broadcasts.
at 4:52 PM