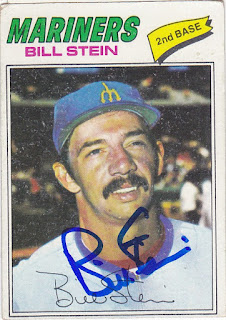 This is the last of the '77 Topps cards and, like the last one, it was a card that I unlocked in the Topps Diamond Giveaway. I sent this card, and another card, to Bill at the beginning of May last year and I had them both back in a mere five days. It was definitely one of my quickest returns over the past year.

Bill spent fourteen seasons in the Majors with the Cardinals, White Sox, Mariners, and Rangers. He was a utility player that played everywhere except for pitcher, catcher, and centerfield, getting most of his playing time at third base. He was a career .267 hitter that tallied 44 home runs and 311 RBI.

As witnessed by the horrible airbrushing on this card, Bill was an original Mariner and was taken with the fifth selection in the expansion draft. He saw the most playing time of his career in that inaugural season and, as a result, set many career highs that year including runs, RBI, doubles, triples, and home runs. He was the clubs primary third baseman that season and he had two two-home run games, as well.
at 5:03 PM

That is quite an interesting airbrush job. Congrats on the quick return though!