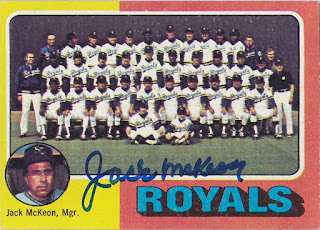 In 2011, Jack McKeon got hired on as the Marlins interim manager. I sent three cards his way and he signed all three of them in three weeks time. Two of the three cards were team cards and I posted his 2004 Marlins team card a little over a year ago.

Here is his '75 Topps Royals team card. The one improvement over this card and the Marlins card is the inset photo of Jack and his name on the front of the card. This card was a no-brainer to send to him while the Marlins card took some deliberating.

I have had this card in my collection for quite some time. I picked it up in a trade as a kid for one reason. I figured that this card was the closest I was ever going to come to a George Brett rookie card, even though I am not even sure if George is in the picture or not.

It turns out that I was wrong as I did own a George Brett rookie for a bit. For Christmas last year, I bought my best friend a mini George Brett rookie card. George is still his favorite player and I got a good deal on the card from Check Out My Cards. I only had the card in my possession for a couple of weeks, but it was fun to have while it lasted. It was a hard gift to part with, but my friend really enjoyed it as he never knew about the mini set.
at 10:32 AM

You're a good man, buying a '75 Brett mini for someone.