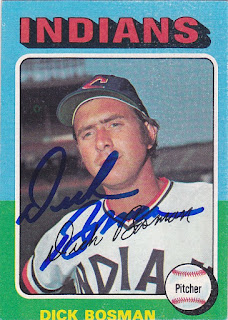 This is another card that I unlocked in the Topps Diamond Giveaway. This one features pitcher, Dick Bosman, who played for the Senators/Rangers, Indians, and A's during his career. Like the rest of the Million Card Giveaway cards that I unlocked, this one was signed through the mail. I sent this card to Dick at the end of April last year and I got it back about a month and a half later. This was the last card to come back in the lot that I sent out and I had actually forgot about it until it found its way home.

Dick pitched in the Majors for eleven seasons. He was mainly used as a starter during his career, which finished with a record of 82-85 with a 3.67 ERA. His best season probably came with the Senators in 1969 when he went 12-5 with a 2.19 ERA.

Dick's claim to fame is that he threw a no-hitter with the Indians in 1974. Against the A's, he allowed no runs on no hits with no walks while striking out four. The only thing that prevented it from being a perfect game was the error that Dick committed on a throw to first in the fourth inning. But, I guess if you are going to lose a perfect game to an error, it is better to cause it yourself than have someone else screw it up for you.

Speaking of the Million Card Giveaway, has anyone heard if Topps is going to bring back something similar to that this year? Or are they going to stick with the boring thing they did last year?
at 4:55 PM

Excellent! He was also the pitching coach for the Rangers.