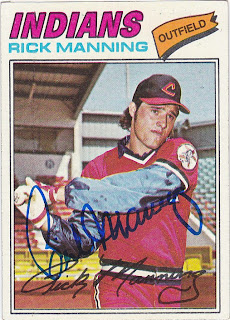 This is another card that I unlocked in the Topps Diamond Giveaway. While I usually get the Giveaway cards signed through the mail, I actually tried to get this one signed in person last season. Rick works for the Indians as the color commentator for the TV telecasts. The Indians were in Kansas City last year for the Royals home opener, so I took this card with me to try to get signed. Unfortunately, I did not see Rick at all while the Tribe was taking batting practice, so I had to resort to sending it to him by mail. I sent the card out in the middle of July and I had it back eight days later.

Rick spent his thirteen year career with the Indians and Brewers. He made his Major League debut as a twenty-one year old and he won a Gold Glove as an outfielder the following season. For his career, he was a .257 hitter with 56 home runs and 458 RBI.

In 1981, Rick caught the final out in Len Barker's perfect game.

You have got to love the old Indians all red uniform.
at 5:02 PM

Manning's a favorite son of my old work town, Niagara Falls. Glad to see he's such a prompt signer.