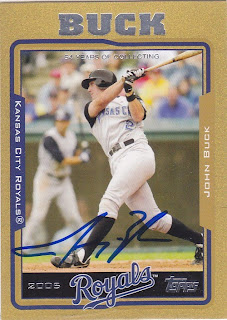 Here is the second signed 2005 John Buck card that I have posted in the last couple of weeks. The first one can be seen here and this card was signed at the same time as the first. This one, though, came out looking a little better than the first one.

This card was awarded to me when I won a contest on "A Pack a Day". Skoormit hosted his Cali vs. World contest and I was lucky enough to have the closest guess. Though this card wasn't the main prize, it was still nice to get. It was even nicer after I was able to get it signed.

I like what I am seeing so far from Buck this year - he is the first consistent catcher for the team since Pudge back in 2003.