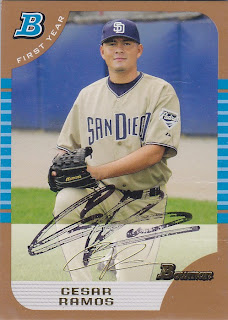 Here is the second of the five 2005 Bowman Padrographs that I have to post. Unlike the first one, this guy has some Major League service time.

Cesar Ramos was selected by the Padres as the 35th overall pick of 2005 draft after playing college ball at Long Beach State. He progressed steadily up the minor league ranks and by the end of 2008, he had one season of AAA under his belt. He repeated AAA in '09, but by September, he had earned himself a September call-up. In five games that month (two starts), Cesar had an 0-1 record with a 3.07 ERA. He did not allow a home run and he struck out 10 in 14.2 innings.

He started off the 2010 season with the big club and it looks like the Padres decided to use him as a LOOGY last year. Through the first month of the season, Cesar had pitched in six games, but he had just 2.1 innings of work to show for it and a 3.86 ERA (one earned run). In May, Cesar had a couple of bad outings (one where seven runs were scored in one inning) and he was shipped back to Portland. But, again, he did good enough in Portland to get another September call-up. In the final month of the season, Cesar threw 3.2 scoreless innings to drop his ERA to 11.88 for the season.

In December, Cesar was packaged in the deal that took Jason Bartlett from Tampa Bay to San Diego. Cesar had a good spring and made the Rays Opening Day roster. Hopefully he will stick a little longer this year than last.

I noticed on Sportscenter last night that the Padres no longer wear these sand colored road uniforms. Is this the first season that they have gone back to grey?

Though the autograph is a little bubbled, it is interesting to note that Cesar's signature looks just like the one pre-printed on the card.

Congrats to the Night Owl for swooping in and taking yesterdays contest in less than an hour. I hope to have your card posted on Monday.
at 6:07 PM

The Padres changed to grey road unies this year.