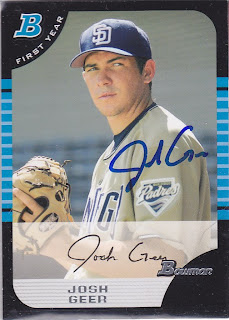 Here is the third of the five 2005 Bowman Padrographs. This one features Josh Geer.

Josh was drafted by the Padres in the third round of the 2005 draft out of Rice. He progressed steadily up the ranks and he got his first shot at AAA in 2007. He started out 2008 in AAA, as well, and he did good enough to get called up to the Majors at the very end of August. In the last month of that season, Josh got five starts and he went 2-1 with an ERA of 2.67. That is not a bad start to a Major League career.

Unfortunately, Josh could not keep it going in 2009. He started that season with the big league club and he went 1-7 with a 5.96 ERA through the first four months of the season. The Padre brass were not impressed and they shipped him back to AAA after 17 starts. Josh has not appeared in the Majors since.

I mentioned in yesterdays post that the Padres no longer wear these sand colored road uniforms. Rod left a comment saying that this is the first season for the new gray uniforms. That is too bad because I always liked the sand colored ones just because they were different.
at 11:05 AM