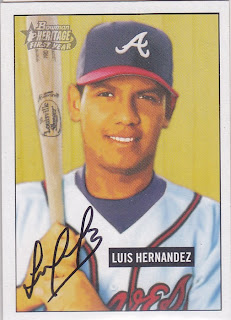 Here is a card that I got signed at a Royals game in 2009. Luis signed it by the dugout after he finished taking his hacks in batting practice.

Luis began his professional career with the Braves in 2002, but he never played a game as a member of the Atlanta Braves. He made his Major League debut with the Orioles in 2007 and he went on to hit .290 with a home run in 30 games with them. The .290 average is the highest he achieved in the Majors.

It looks like Luis is playing for the Mets AAA team this year, though he did not play yesterday in the Buffalo Bisons opener.

Luis certainly has an interesting looking signature. The only thing that I can make out from it is the first letter of his first name and the last letter of his last name. I do like how he underlines his name, though.
at 11:09 AM

It really does. And his signature is pretty cool. He signed a TTM request for me back in 2008, and the underline definitely brings everything together.

I have to agree with those guys...it has a great contrasting space to sign and the black sharpie shows up nicely.