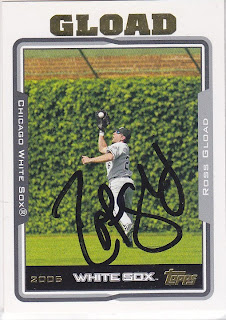 When I got this card signed, I was standing by the players exit from the parking lot with a small group of graphers. I asked Ross if he would sign for us and he said "for you kids, sure, since kids don't even collect cards anymore". I told him that most cards were too expensive for kids to collect these days and he said "I suppose you're right". It was certainly an interesting interaction.

I enjoyed the time Ross spent with the Royals. He was primarily the starting first baseman and, though he was small for a first baseman, he had a good stick and a good glove. He is not the type that is going to club a lot of bombs, but he always seemed to put the ball in play.

Before he went to the Royals, Gload's White Sox teammates had nicknamed him Ichigload because he was able to hit about anything.

Ross is playing for the Phillies now and through 14 games, he is 4-16 with one RBI. It looks like he is primarily being used as a pinch hitter.
at 9:23 PM