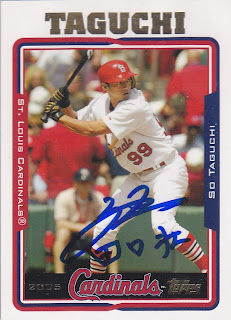 Here is a card that I got signed in Des Moines in 2009. So was playing his final season in the States and he spent a majority of the season playing for the Iowa Cubs. I was able to get this card and another card signed by him as he was leaving the park for the night. There was a good-sized crowd outside the Cubs clubhouse, but So was nice enough to sign for everyone there. I had seen him sign three cards for a few people, but by the time he got to me, he was only signing two. I can't complain though since he signed both of my cards in English and Japanese. Until a couple of weeks ago, those were the only cards I had that were signed in Japanese.

It looks like So went back to Japan last season and played with the Orix Buffaloes. He turns 42 this summer, so it will be interesting to see if he has any more left in him. He did OK last year, hitting .261 in 53 games.

I was surprised to see that So played second base for the Cardinals three times. I did not expect to see that.
at 6:15 PM

Cool card - you don't see many Asian players sign both versions of their autograph on the same card. (You don't get that many that even sign the Japanese version for American fans.)