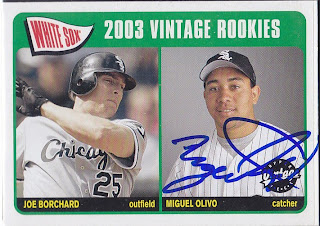 Here is the first Miguel Olivo card that I have to post on here. I got this card signed while Miguel was with the Royals in 2008. He signed it from the window of his car as he was leaving the the parking lot after a game. I'm pretty sure that is the only time I have gotten cards signed from inside of a vehicle and Miguel was very cool about it. He made sure to sign for all the kids and ladies before getting to me.

Come to think of it, I think that I have got autographs from Miguel from just about every spot at the ballpark except from inside of it.

Miguel has bounced around a bunch over the years. He made his Major League debut with the White Sox in 2002 and has made his way through Seattle, San Diego, Miami, Kansas City, and is currently playing in Denver. His stint with the White Sox lasted until the middle of 2004 when he was packaged in the deal that brought Freddy Garcia to the south side of Chicago.

Does anyone know what Joe Borchard is up to these days? I wouldn't mind getting his half signed to complete this card.

Speaking of this card, what exactly is a "Vintage Rookie"?
at 1:23 PM

Joe Borchard's with Triple A Fresno in the Giants' organization. He's been there all year pretty much.

The "vintage rookie" label would have been fitting for somebody like Alan Zinter, I suppose.

That card is going to look great once Joe signs it.