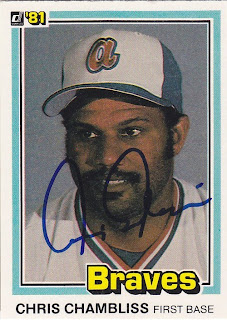 Here is the card that I got back from Chris Chambliss. Chris managed the Charlotte Knights this past season and I sent the card to the club. I sent it on the fourth of May and I got it back on the tenth of June.

Chris played in the Majors for 16 years (not counting his one at-bat in 1988) and he played for the Indians, Yankees, and Braves. He made one All-Star team in 1976 and he played in three straight World Series with the Yankees in the '70s, winning two of them.

For a guy that is known for his walk-off homer in the '76 ALCS, Chris did not hit a lot of home runs during his career. The most he ever had in a season was 20 and he did that twice while playing for the Braves. For his career, he had only 185 home runs.

In 1988, after not playing in '87, Chris got into one game with the Yankees and he batted once and struck out. Does anyone know more about that instance? Was it one of those "I wanted to retire as a Yankee" thing or what? I didn't think that those players got actual at-bats in regular season games.