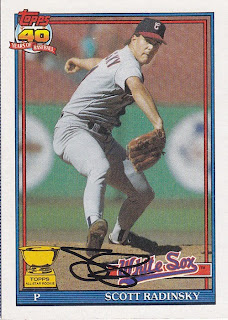 Here is the first of three Scott Radinsky cards that I have to post this week. I got them all signed at Kauffman Stadium a week and a half ago while Cleveland was in town. Scott is the Indians bullpen coach.

The game I went to was a Sunday day game, so there wasn't any batting practice. Luckily, most of the Indians pitchers were out on the field getting their work in. There was even two guys out there with catchers mitts on that I was hoping were the two catchers on the staff. Then I noticed that one of the "catchers" was left-handed and realized that he wasn't an actual catcher. The left-handed one turned out to be Scott Radinsky. I wonder how many former Major Leaguers own a left-handed catchers glove.

If you click on Scott's name at the top of the post, you will be redirected to Scott's Baseball Almanac page. On that page, there is a signed '93 Fleer card of Scott and he is wearing a left-handed catchers mitt on it. What are the odds?
at 7:45 PM

I remember getting a few Radinsky cards signed back in '95 when he was on a rehab assignment with South Bend. Can't tell you much more than that, but I don't remember a catcher's mitt being involved. But maybe there was..

Scott Radinskey was in a punk band. I think it was called Pulley.

I like the look of the '91 Topps w/autograph. I think it's because the design is classic, the set is printed on cardboard, and the set doesn't feature a facsimile signature. All these things make it a winner.

When I first glanced at this card, I didn't think it was signed. It's interesting that he would sign it where he did with all of the relatively open space.