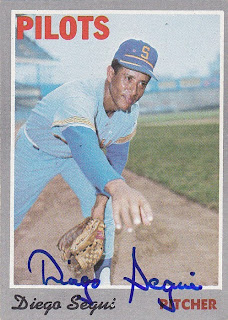 Here is another card from the Kansas City A's reunion at the T-Bones game in July. This was the first card that I got signed that day by a former A and it is also the first Pilots card that I ever got signed. Diego was one of the two A's that I was able to catch before they headed up to their suite.

Diego pitched in the Major Leagues for 15 seasons. In that span, he managed to play for six teams- the A's (three different stints), Senators, Pilots, Cardinals, Red Sox, and Mariners. He was a starter early in his career, but he spent a majority of his time coming out of the 'pen. He was a twelve game winner for the expansion Pilots in 1969. That was the most games he ever won in a season and he did it in 66 appearances (8 starts). Four years later with the Cardinals, he posted a career high of 17 saves, as well. For his career, Diego was 92-111 with 71 saves and a 3.81 ERA.

I wonder how many players actually played for the Pilots and Mariners. There can't be too many.
at 6:41 PM

Segui is the only one to have played for both.

His son David also plays for the Mariners. Diego was at the closing ceremonies of the Kingdome in 1999 too.

Very cool card to get autographed. I've only ever got one Pilot autograph and it was the John O'Donoghue from this same set.

It must have been rough to play on two expansion teams.

Thanks for all the comments, everyone.