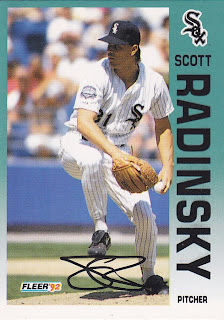 Here is the second of the three cards that Scott signed for me earlier this month. Yesterday, Ryan left a comment on the first Radinsky post saying that he didn't even see the signature on the card at first and that it was strange that he signed it where he did with all of the open space on the card. Based off of that card and this one, it looks like Scott just likes signing cards in that spot. It looks good on this card with his foot about to land on the signature.

Scott pitched for the White Sox, Dodgers, Cardinals, and Indians during his 11-year Major League career. He spent five years with the Sox and had his best season with them in 1991. That year he had a career high in innings pitched (71.1) and ERA (2.02).

I have one more Radinsky card to post tomorrow and I'll have another card up later tonight, as well.
at 3:33 PM