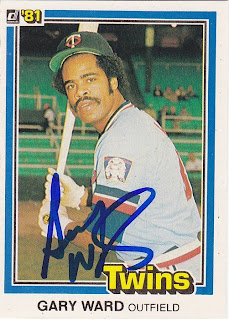 Here is the card that Gary signed for me through the mail earlier this summer. I sent this card to him on the 4/28 and I got it back on 6/2. Gary was the batting coach of the Charlotte Knights this past season and I sent the card to the team. All three coaches on the Knights have '81 Donruss cards, but I never got around to sending one to Richard Dotson. I guess I'll have to give him a try next year.

Gary played in the big leagues for parts of 12 seasons. He played with the Twins, Rangers, Yankees, and Tigers. He was a two-time All Star (once as a Twin and once as a Ranger) and his best season came early in his career in 1982. That season, he had career highs in home runs (28) and RBI (91). He finished his career a .276 hitter with 130 home runs.

Gary only played in 13 games with the Twins in 1980, so I guess I'm lucky that Donruss even made a card of him.

This is the last '81 Donruss that I have to post for now. Hopefully, I will be sending a new batch of cards out in the mail sometime soon. Otherwise, it might be a long winter.