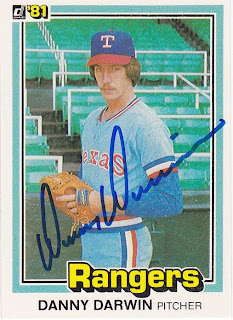 I got this card signed through the mail earlier this summer. I sent it to Danny care of the Chattanooga Lookouts where he was the teams pitching coach this year. I mailed the card out in the first week of May and I got it back about seven weeks later. It's not the fastest turnaround I have ever had, but I'm not going to complain about it. In fact, most of the '81 Donruss cards I am posting this week are cards that I mailed out at the beginning of May, but didn't get back untill after I posted the last round '81s.

I was surprised to see that Danny had a 21 year career. That's a long time to pitch. He broke into the Majors in 1978 and he threw his last pitch in 1998. During that timespan, he pitched for the Rangers, Brewers, Astros, Red Sox, Blue Jays, Pirates, White Sox, and Giants. He never made an All Star team and he never got to play in the playoffs, but he had a nice career nonetheless. He finished his career with a 171-182 record with a 3.84 ERA and 32 saves. That's not too bad for a guy that didn't even get drafted.