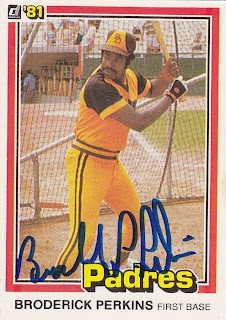 Here is another card that I got signed through the mail early this summer. Out of all the '81 Donruss that I sent this spring/summer, this one took the longest to get back. I sent this card to Broderick on 5/12 and I got it two and a half months later on 7/26. But, at least I got it back. In fact, every '81 Donruss card that I sent out at the end of May and beginning of June came back signed.

Broderick played in the Majors for seven seasons with the Padres and Indians. He was mostly a part-time player and he only appeared in more than 100 games once. He was mostly a singles hitter as he finished his career with 8 home runs and 62 doubles out of 340 hits. But, he seems like he was a good contact hitter with his .271 career average. He even had two seasons where he had more walks than strikeouts.

The best part about this card has to be the uniform. According to the Hall of Fame's Dressed to the Nines, the Padres only wore that yellow uniform as an alternate in the 1978 season. So, we have an archived photo used on this card and I'm pretty sure it is not the only one used in the set.

Another unique thing about the photo is that it is one of the few that was not taken in Chicago.

This is my first Padres card that I have got signed from this set and I don't think I could have picked a better one than this.

Wow, he looks like a hi-liter. And I've never heard of him until your post, thanks for sharing. I didn't know that anyone named Broderick ever played in the Majors.

You don't see that many batting cage shots, either. Neat card.