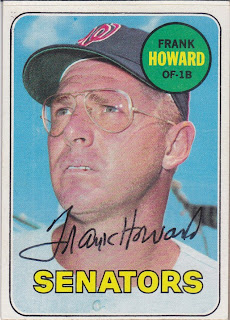 Here is one of my more recent through the mail successes. I got this card returned in early February. It only took me about a week to get it back. As for the card itself, I got this card from Scott, a contributor to A Pack A Day. He checked out my want list and saw that I was needing a Frank Howard card. He emailed me that he had this card. He said that he got it to get signed, but he got in line too late and got cut off. I told him that I had the same experience a few years ago with Juan Marichal and asked him what he would like for it. He told me to just send him a self-addressed stamped envelope and it was mine. It was a good will offering for me missing out on Marichal since he met him in 1993. He even sent me a signed Sal Bando card, too. He said that he didn't want anything in return, but I sent him a few packs to rip for APAD.

When I had this card on my want list, I specified that I wanted him as a Senator on the card. It didn't matter if it was new or old, I just wanted to have a signed Senator card. The only one that I have now is of a Harrisburg Senator. I had an '84 Topps of Howard (Mets Manager) and I found some cheap cards of him on ebay as a Ranger, but I decided to hold off to see if the want list would pull through. And it did. Thanks Scott!

At the museum at Rangers Ballpark in Arlington, they have a Frank Howard Senators/Rangers jersey. It was a Senator jersey in 1971. When they moved to Texas, they pulled the lettering off and sewed on Rangers. But, you can still see where it said Senators. I think that these were only used for Spring Training. Here is a picture I took when I was there in 2006. 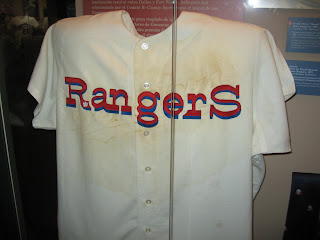 I've never seen that jersey with 'senators' in the background. Very cool.