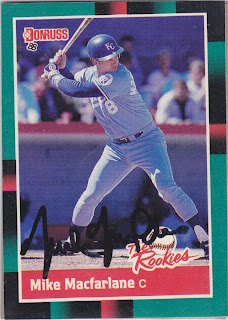 I got this card signed at this year's Fanfest. Mike was nice enough to sign all three of my cards. As for this card, it was one of the odd-ball cards from Stats on the Back. I don't have too many cards from The Rookies sets. Most of the time, they were only availabe as a set. But, I do know of a couple sets that were put into packs.

Mike was a pretty decent catcher for the Royals in the '90s. In 1993, he hit 20 dingers. That seems like a pretty decent number for 1993. Out of all of the players to ever wear a Royals uniform, he is in tenth place in games played, ninth in doubles, and first in being hit by a pitch.
at 9:49 PM

That is a great looking card.

Macfarlane was a pretty underrated player. Career OPS+ of 99 out of a catcher is not too shabby...even if a lot of it is HBP :)