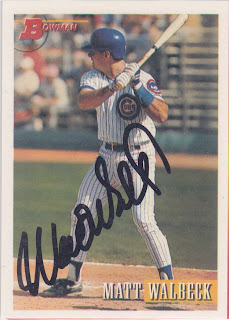 Here is the one '93 Bowmans that I was able to get autographed by myself. I got this card signed in Kansas City last summer when the Rangers visited the K. Matt was their third base coach last season. At the ballpark, the Rangers were all stretching and getting ready to take batting practice. Matt was warming up with one of the other coaches. He had his catchers glove on and was down in a squat helping the other coach get ready to throw some BP. While he was doing that, I asked him if he would sign and he said something to the effect of "yeah, sure, just give me a minute". He caught a few more balls and then came over and signed all three cards that I had.

If you look at the Baseball Almanac autograph and compare it to this one, you can see how his signature has changed over the years. Both of them start off the same. But that is where the similarities end. On BA's auto, you can see two distinct names and Matt is easy to make out. On mine, it just looks like one word.
at 2:30 PM

There sure isn't. Before I saw the one on Baseball Almanac, I had no idea what was going on in the signature in my card. It sure looks like it starts with a W and ends with a horseshoe or something.