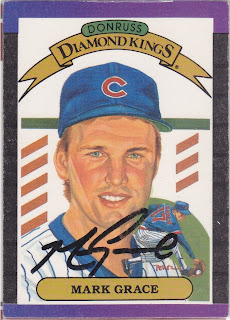 I got this card signed through the mail on the fifth of February. It took less than a month to get this card back.

When I opened the envelope that this card came back in, my first thought was "sweet, Mark Grace". Then I looked at it a little closer and thought "what the hell happened to my card". This thing took a beating. The corners are all dinged up. The top edge is kind of frayed. There are two wierd creases in the middle of the card (can't see them on the scan, though) that are not deep enough to be creased on the back. The black edges are faded. And part of the signature rubbed off, just like my Sid Bream card. I still don't know what to think of this card. I don't know if it's because of the USPS or if Mark Grace treats cards like crap. The reason why I even bring that up is because 30-Year Old Cardboard had the exact same problem the first time he went for Grace TTM. I may have to do the same thing he did and send one out to him again.

This is the only Diamond King card that I have had signed.

Also, when I got back from the Wichita State game on Saturday, I had a couple of packages stuffed into my mail box. The first one was from Paul of Paul's Random Stuff. He traded me some 2008 Royals cards that I did not have. I sent him a couple of cool Mets cards that I figured would mean more to him than to me. I also had a box from Motherscratcher of Achiever Card Blog. A while back, he got some cards in a trade or something and posted them. I saw an Al Fitzmorris card and I asked if he would be willing to trade it. He said that I could have it and he mailed to me along with some random packs. So, that was very cool, especially the Mega Metal cards. Those were fun.

So, thanks Paul and Motherscratcher. Sorry I kept forgetting.
at 10:37 PM