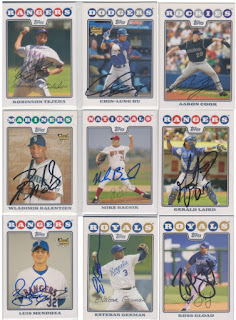 I posted thirteen individual cards from 2008 Topps with all but one of them being players that have never been featured on here. Now, it is time to the forty or so players that have been posted previously. This is the first in a five part series for this set.

Robinson Tejada- I got this card signed at a Royals game in 2008 while Rob was still with the Rangers. This is another example of me getting a guy's autograph before they become a Royal.

Chin-lung Hu- I got this card signed at an Oklahoma Redhawks game while he was playing for the visiting Las Vegas 51s.

Aaron Cook- Aaron signed two cards for me at a Royals game in 2008. He signed during batting practice and he is still the only starting pitcher to sign for me in the ballpark prior to their start. Both cards he signed for me were signed in black and both signatures were placed right on top of the pre-printed signature and are really hard to make out. That is why you should use blue Sharpies kids.

Wladimir Balentien- This is one of the three cards that Wlad signed for me at a Rangers game while his Mariners were taking batting practice in 2008.

Mike Bacsik- Mike signed three cards for me at a Wingnuts game in 2011 while he was playing for Ft. Worth.

Gerald Laird- Gerald signed three for me during batting practice at Kauffman Stadium during the 2008 season.

Luis Mendoza- Here is another future Royal. But, unlike Robinson Tejada, I did not get his autograph until he joined the organization. I got this card signed by the Royals parking lot after their home opener in 2012. This is the first card of Luis that I have posted on here, but he will be getting his own post shortly.

Esteban German- I got this card signed by the Royals parking lot in 2008.