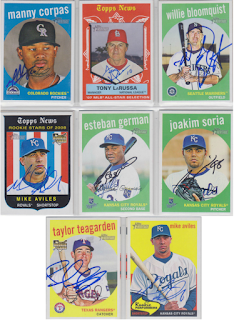 Manny Corpas- This is the second card that Manny signed for me at a Royals game in 2010 while he was still with the Rockies.

Tony LaRussa- I got this one signed through the mail in 2009. I sent him his '81 Donruss card to sign and threw this one in with it. I still need to get an A's card signed by him and maybe even a card from his playing days. In case you are wondering, it looks like Tony still signs through the mail. If you need his autograph, send it care of the Boston Red Sox.

Willie Bloomquist- Willie signed this card for me in Minneapolis when I went to the Twins final regular season series at the Metrodome. Willie was playing for the Royals at the time.

Mike Aviles- I got this card signed by the Royals parking lot in 2009. Before leaving for Kansas City that week, I went by my local card shop to see if he had this card. He did not, so he opened packs until he pulled this one for me.

Esteban German- Esteban signed this one for me at Royals Fanfest in 2009.

Taylor Teagarden- I got this one signed in Springdale, Arkansas in 2010 while Taylor was playing for the Frisco Rough Riders. He was nice enough to sign for me from the dugout after the game.

Mike Aviles- In case you couldn't tell by the super thin signature, this card was signed at the same time as the other Aviles card on here. It was a regular Sharpie, so I am not sure why it came out so thin. He must have just been grazing the surface of the card with it.