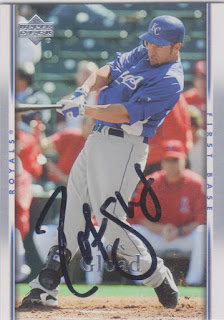 Here is the third card of Ross Gload that I have posted on here. I posted the first one five years ago and the second one two months ago. Those first two were signed by the Royals parking lot in 2008. This one was signed in that same spot that year, but about a month later.

Ross was traded to the Royals from the White Sox for Andy Sisco after the 2006 season. He would go on to play in Kansas City for two seasons before being dealt to the Marlins prior to the start of the 2009 season. With the Royals, Ross mainly played first base and hit .280 with 10 home runs and 88 RBI. His better season of the two was the '07 season. That year he hit .288 with 7 home runs and 51 RBI. He had a little bit more playing time in '08, but most of his offensive numbers were down.
at 10:52 AM