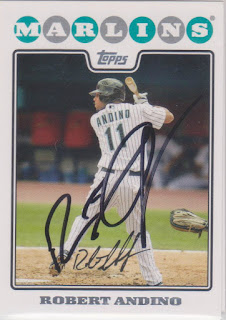 In 2009, I flew out to Maryland to visit an Army buddy. Since I was out that way and it was still baseball season, I had to take in a couple of baseball games. The first game I went to was a Wilmington Blue Rocks playoff game. The Rocks are a Royals affiliate, so that was a must. Then, you can't go to Maryland without taking in an Orioles game, so we went there, too. Plus, I was able to meet up with Ryan, from The Great Orioles Autograph Project, at the game and do some 'graphing with a local, which helped out a ton.

Long story short, this is one of the autographs that I got at Camden Yards that night and I would not have got it if it wasn't for Ryan. I thought that the 'graphing was done after batting practice. But Ryan knew better and we went down by the Orioles dugout while they were coming out of the tunnel right before the game and we got some more. Robert was nice enough to stop and sign one of the two cards that I had of him.

Robert played in the Majors for parts of ten seasons with the Marlins, Orioles, and Mariners. Over that time, he was mainly a part time player except for 2011 and '12 with the O's. He hit .233 for his career with 18 dingers and 97 RBI. His best season was with the O's in 2011. He played in a career-high 139 games that season and responded with a .265 average with 5 homers and 36 RBI.

I had first visited Camden Yards in 2001 while Cal Ripken, Jr. was still active. After he retired, the O's retired his number and placed a monument outside of the park with the rest of their retired numbers. I was looking forward to seeing his number 8 on display, but some rowdy drunks had other plans. Four days before I got there, four guys stole the three and a half foot monument and threw it in the back of their pickup truck. So, when I got there, all that was left for me to see was the base and a crime scene. 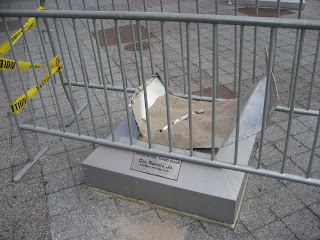 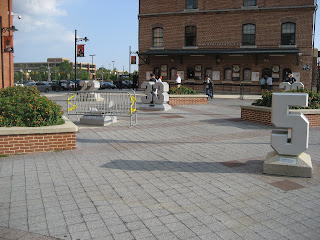