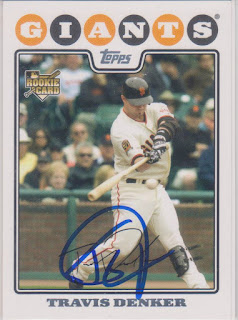 When I started posting my 2008 cards, I changed up my format a bit where I would not post multiple cards of the same player. Once a player gets a card posted, any subsequent cards would get lumped into a post with other guys from that set that had already been posted. I have been doing good with staying with that format, but I am going to make an exception today. So, here is the third and final card of Travis Denker that I have to post. I posted his first card four years ago and his second one three years ago. The reason why Travis gets a third post is because I have a neat piece of memorabilia from him that I had been planning to post with this card ever since I got it signed in 2015.

In 2014, Travis was playing for the Laredo Lemurs in the American Association. The Lemurs made the playoffs as the wild card and played against the number one seed Wichita Wingnuts in the first round of the playoffs. I attended the deciding game four of that series, which the Wingnuts won. But, just before the 'Nuts punched their ticket to the finals, Laredo had the tying run on base in the top of the ninth with two outs. Travis Denker was on deck and, when the batter made the third out to end the game, he smashed his bat into the ground.

The Wingnuts stormed the field to celebrate and the Lemurs made the long walk back to the clubhouse to get ready for a long bus ride home. While the 'Nuts were celebrating, I saw Laredo's trainer grab Denker's busted bat from the on deck circle. He then walked over to a kid and offered it to him and the kid didn't want it. So, the trainer started to make his way to the clubhouse and I hollered for him when he got by me and I asked for the bat. He seemed surprised that I wanted it and pointed out to me that it was broken. I told him it was okay and he brought it over to me.

So, I got the bat and just had to figure out a way to get it signed. Denker signed to play in Mexico the next season, so it looked like I was going to luck out. But, he ended up back in Laredo after the Mexican season was over and Laredo made the trip to Wichita shortly after. So, I took my bat to a game with me and I got his attention when he was coming to the field. I asked him if that was his bat and he said that it wasn't as he was using a different bat that year. I told him that it was from the previous season and he realized that it was his and was more than happy to sign it for me. 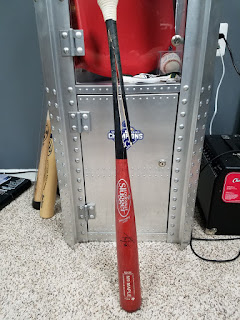 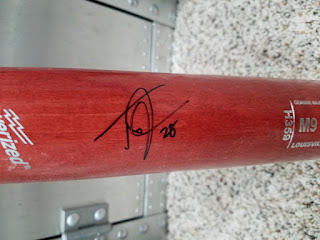 Sure, Travis only played in 24 Major League games. But I still think it is cool that I have a game used bat signed by him and it only cost me two general admission tickets to Wingnut games.
at 9:48 AM