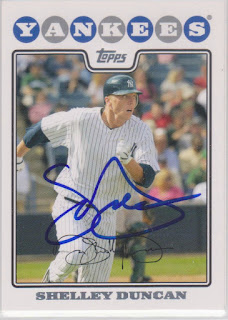 Here is the final single card post from 2008 Topps. I still have quite a few cards from the set to show and those are going to have to be broken up into multiple posts, so I am not quite done with the set yet.

Here is the card of Shelley Duncan that I got signed at a Diamondbacks Spring Training game in 2014. I had set up shop along the third base line that day and somehow he had gotten past me down the line. But when I called out to him, he came back over to me and signed one of the three cards I had of him.

Currently, Shelley is working for the Blue Jays as their Major League field coordinator. I have no idea what a field coordinator does. But he is listed with the Jays coaching staff and is assigned a number, so he must suit up for games.
at 7:39 AM