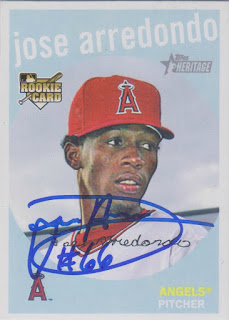 Here is a card that I got signed at Kauffman Stadium in 2009. The Angels were in town that day and Jose was the first guy on the team that appeared in the dugout right before batting practice. He just walked out in a warm-up jacket with headphones on to catch the end of the Royals batting practice session. With the jacket on, I wasn't really sure who he was and that was before I had a smart phone. So, I thumbed through my cards and deduced that it had to be Jose. I got his attention and was right. He made me go to the opposite end of the dugout to sign, but I was able to get my spot back afterwards.

Jose pitched in the Majors for just parts of four seasons with the Angels and Reds. Over that time, he was 22-11 with a save and a 3.27 ERA. His best season was his 2008 rookie campaign with the Angels. That year, he racked up an impressive 10-2 record while working exclusively out of the bullpen. Plus, he had a 1.62 ERA and 55 strikeouts in 61 innings of work.

Jose last pitched in the Majors in 2012. I am guessing that some arm problems derailed his career as he missed all of the 2010 season. He was out of baseball after 2013, only to reappear in the Atlantic League in 2016 and 2017. It looks like his career is officially over now.

I love Jose's signature. It is not readable, but it definitely has some flair and a very legible #66.
at 8:54 AM