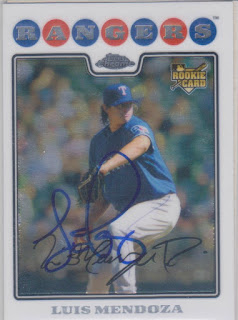 Here is the second card of Luis Mendoza that I have posted on here. The first one got lumped into a "The Rest of 2008 Topps" post because I knew I had this card coming up and I didn't have enough cards from this set to do a "Rest of" post. So in all actuality, this is pretty much the first card of Luis that I have posted.

In 2012, I bought a Royals partial season ticket package just so I could get tickets to the All Star game in Kansas City. While I probably sold most of the tickets, I was pretty thrilled to attend the home opener. While some teams refer to that as Opening Day, it is only Opening Day when both teams enter the game with a 0-0 record. The Royals were 3-3 entering the game, so it was definitely a home opener. Anyways, I hung out by the Royals parking lot after the game to try to get some autographs and I came home with a few. This was one of the cards signed for me that day and Luis signed all three cards that I had of him.