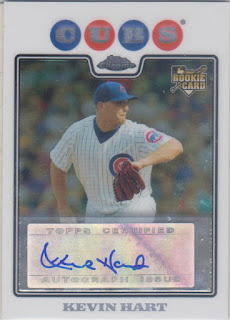 This is a card that I picked up in a trade in 2008 or 2009. Jim from http://jamheat67.webs.com/ saw some Cubs cards on my blog that he needed and we worked out a trade. I sent him a Brian McRae, Les Lancaster, and Juan Guzman card and I got this one in return. I think he might have got the better end of the deal, but what are you going to do?

Kevin had a relatively short Major League career. After breaking in with the Cubs in 2007, he threw his last Major League pitch with the Pirates in 2009. Over that span, he was 6-11 with a 5.27 ERA.

Despite the short career, he did have one postseason appearance. In the 2007 division series against the Diamondbacks, he came in to relieve Ted Lilly in the fourth inning of game two. He did not allow a hit in his inning of work, yet he still managed to allow two earned runs to score. He came in with a runner on third and one out and proceeded to strike out the two batter he faced. He came back out in the fifth and walked two of the three batters he faced. He got yanked from the game and two relievers managed to allow his two runners to score. So, he postseason stat line is 2 walks and 2 K's with an 18.00 ERA in an inning of work.