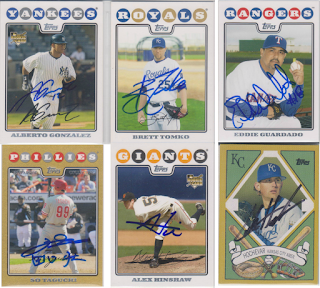 Here are the final cards from 2008 Topps.

Alberto Gonzalez- This is the second card of Alberto that I have posted on here and both have been lumped into a "best of" post. I have a third one coming up that will get its own post, so this is going to have to do for now. Alberto signed this card for me in 2015 while he was a member of the Wichita Wingnuts.

Brett Tomko- Believe it or not, but I did not get this card signed by the Royals parking lot. I actually got it at a Kansas Stars game in 2016.

Eddie Guardado- Eddie signed this one for me while I was waiting outside of Kauffman in 2017. Eddie was the Twins bullpen coach at the time.

So Taguchi- I got this card signed outside of Principle Park in Des Moines, Iowa in 2009. So was playing his final season in the U.S. that year and he spent the majority of the time with the Iowa Cubs. He signed two cards for me after the game and both featured his Japanese signature.

Alex Hinshaw- This is the first card of Alex that I have posted on here. But, I have another one that will get its own post. That one is a 2009 card, so it might not show up on here until 2022. Alex signed this card for me while he was with the Wingnuts in 2014.

Luke Hochevar- I have no clue where this card came from. Night Owl probably sent it to me. I am assuming that the card was a Target exclusive, but I am not even sure about that. All I know about the card is that Luke signed it for me at Fanfest in 2009.

And that is it for '08 Topps. You can say whatever you want about the design of the set, but I will say this- you will never get 2008 Topps confused with any other Topps set.
at 9:29 AM