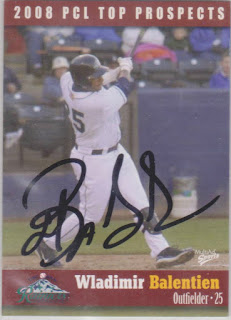 Here is the third and final card from this prospect set that I have been able to get signed. This one was signed at a Rangers game in 2008. Seattle was in town and I was able to get Wladimir on three cards cards while the Mariners took batting practice. I posted one card already and that one can be seen here.

At the time, I didn't know anything about Wladimir. But, I had a few cards of him, so I figured that he must have been an up and comer and I was excited that I got his autograph. Unfortunately, he never thrived in Major League baseball. He played his last game in the Majors in 2009 and batted .221 with 15 home runs and 52 RBI in 170 games.

In 2011, he went to Japan to play and he is a stud over there. He signed with the Yakult Swallows and is still playing with that team this season. In his first two seasons in Japan, he hit 31 home runs each year. Then, in 2013, he went off and knocked 60 bombs, breaking the Japanese single season record of 55. Since that year, he has had 30+ home runs every year minus what I am assuming was an injury plagued 2015.

Wladimir is in his ninth season with Yakult and is currently hitting .284 with 8 home runs and 29 RBI through 29 games. For his Japanese career, he is currently a .272 hitter with 263 homers and 699 runs driven in. Considering that he drove in 131 in a season twice, I honestly thought that he would have more RBI than that.

This is the first card that I have ever posted of a Rainier player. I have posted some Tacoma cards before, but those were from the early '90s when the team was called the Tigers. They switched to the Rainiers in 1995.
at 12:30 AM