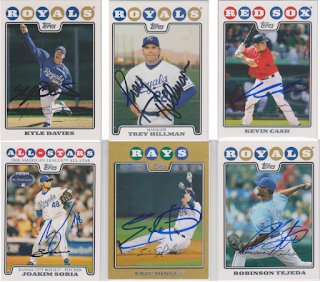 I am almost done with '08 Topps, so I had to break down the last two post to six cards each. This one is a little Royals heavy.

Kyle Davies- Believe it or not, I got this card signed by the Royals parking lot in 2008.

Trey Hillman- I almost posted this card by itself a few weeks back. Then I remembered that I posted a minor league card of Trey many years ago. This one was signed by the Royals parking lot in 2008.

Kevin Cash- I got this card signed in Omaha in 2011 while Kevin was coaching for Round Rock. He has moved up a bit since then and is currently the manager for the Rays.

Joakim Soria- The one current player in the batch, who is currently pitching for the A's. Unlike the last two Royals, I got this card signed at Royals Fanfest in 2009.

Eric Hinske- I got this card signed last year outside of Kauffman Stadium when Eric got dropped off from an Uber. That is another thing that has changed while 'graphing outside of The K in the last ten years. Players now get dropped off from Ubers instead of cabs. The cabs could be seen from miles away and the Ubers now just magically appears. Eric was a coach for the Angels at the time, but has since moved on to the Diamondbacks.

Robinson Tejeda- I got this one signed by the Royals parking lot, but it was is in 2009. I think this is the first time that I got a players base card and update card signed from the same year.
at 3:02 PM