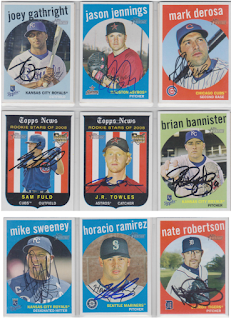 Joey Gathright- I got this card signed by Joey by the Royals parking lot in 2008. Back then, he was signing just his initials. I got him five years later at an American Association game and he was signing his full last name at that point.

Jason Jennings- Speaking of the American Association, Jason did some time there in 2011. He signed this card for me at an Amarillo Sox game in 2011 while he was a member of the Grand Prairie AirHogs.

Mark DeRosa- I got this card signed at a Royals game in 2009. Mark was with the Indians at the time and he signed during batting practice.

Sam Fuld- Sam signed this card for me between games of a doubleheader in Des Moines, Iowa in 2009. He was playing for the Iowa Cubs.

JR Towles- JR signed this card for me after a Round Rock Express game in 2008.

Brian Bannister- I got this card signed at a Royals game in 2008.

Mike Sweeney- This card was given to me by Uncle Moe in 2009. I probably sent him some cards for his 2008 Topps set and he hooked me up with a few autos in return.

Horacio Ramirez- Horacio signed for me from the Royals parking lot after a game in 2008.