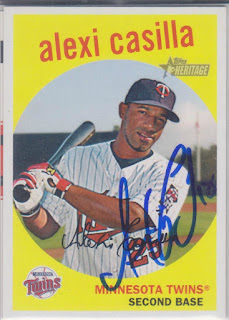 Card number 588 is the first card of this set that I am posting. But, it is not because I have very few cards from this set signed. It is because I have thirteen cards with a number lower than 588, but they all feature dudes that I have been posted on here before. So, '08 Heritage is going to go by quick- two individual posts and two "rest of" posts.

This is the card of Alexi Casilla that I got signed outside of Kauffman Stadium in 2012. Alexi was still with the Twins at the time and he was nice enough to come over and sign this lone card for me after getting off of the team bus.

Alexi is still currently playing, but it is in independent ball. He is currently trying to steal first base with the York Revolution in the Atlantic League.
at 9:37 AM