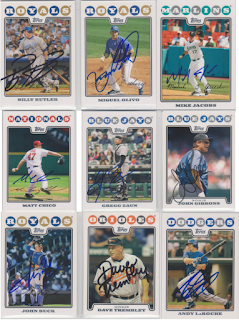 Billy Butler- Like most of the Royals cards from this set, Billy signed this card for me by the Royals parking lot in 2008.

Miguel Olivo- Also by the Royals lot in '08.

Mike Jacobs- Got this card signed by Mike at Royals Fanfest in 2009.

Matt Chico- I got this one signed at a Wingnuts game in 2012 while Matt was playing for the visiting New Jersey Jackals of the Can-Am League.

Gregg Zaun- Gregg signed this one for me in Kauffman Stadium in 2009. He was with the Orioles at the time and he signed right after batting practice.

John Gibbons- The former Royals bench coach signed this card at a Royals game in 2009.

John Buck- John signed this card by the Royals parking lot after a game in 2008. He made an error that cost his team the game, but was still kind enough to sign some autographs afterwards.

Dave Trembley- For some reason, I thought I posted Dave's 2007 Topps card. Well, it turns out that he wasn't in '07 Topps. I was thinking of the Sam Perlozzo manager card that I got signed. So, this card should have been posted on its own. I will make up for it when I get to 2009 Topps Heritage. Dave signed this card for me at a Royals game in 2009.

Andy LaRoche- I got Andy on multiple occasions as he once played for the Wingnuts and also played with the Kansas Stars. This is one of the ones he signed for me as a Nut in 2015.

Posting all of these cards from 2008 Topps makes me realize how much I miss manager cards. For some guys, a manager card would be the only Topps card they ever get.
at 9:38 AM