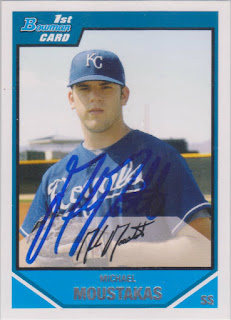 Here is a card of current Royal, and potential American League All Star Game starting third baseman, Mike Moustakas. I got this card signed by him back in 2009 while he was with the Wilmington Blue Rocks. That fall, I went to the Baltimore area to visit a friend and I made him take me to a Blue Rocks playoff game. It was less than ideal weather to be 'graphing because of the rain, but the two cards Mike signed for me came out looking good. Those were the first of many cards that Mike would sign for me since then.

To date, Mike's best season was his first full season in the Majors Leagues in 2012. Though he hit just .242 that season, he set career-highs in home runs (20) and RBI (73). He hit a bit of a rough patch last season when he started out hitting .152 through the first 40 games of the season. The Royals finally sent him down to Omaha to get the kinks worked out and he rebounded to finish out the season at .212. While that is still a low average, he was a huge step forward after hitting .152 through the first quarter of the season. Mike then finished strong in the postseason by hitting 5 home runs and making one beautiful catch in the dugout suite. That catch will live on as a commemorative bobblehead that the Royals will be giving out later this month. Too bad I am going to miss that one.

To date this season, Mike is currently hitting .320 with 5 home runs and 16 RBI. And, he is the leading vote getter for AL third baseman. One year ago, I never would have thought that was possible.

Most of the college teams that are headed to the Super Regionals are now known. Here is who is advancing- LSU, Illinois, Texas A&M, Miami, VCU, TCU, CS Fullerton, Florida, Louisiana-Lafayette, Virginia, Louisville, Vanderbilt, Missouri St, Arkansas, and Florida St. The only one yet to be decided is the winner of the UCLA/Maryland game that is about to get underway. Nobody picked Louisiana-Lafayette or Virginia.
at 10:09 PM

I've never liked getting cards with facsimile autographs signed. I only get them when that's all I have available. At least that autograph is consistent.

I know what you mean