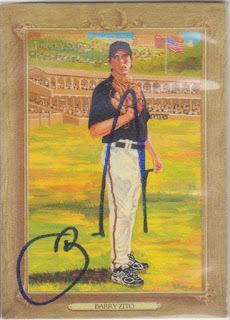 Here is the second card of Barry Zito that I have posted on here. The first card was a TTM that I received in 2005. I posted that card about five years ago and it can be seen here. This one, on the other hand, is the first of three that Barry signed for me last season while playing for the Nashville Sounds.

Last season, Barry signed a minor league contract with the A's and nearly spent the entire season playing for Nashville. My family went to see the Sounds take on the Storm Chaser in Omaha over Labor Day weekend and I was looking forward to getting some cards signed by Barry. He had just come off the disabled list and pitched in relief the night before we were there. It was early September and the A's had already chosen most of their September call-ups and Barry was not one of them. Because of that, I thought his outing the night before was going to be his last time pitching professionally. When he signed for me, I thanked him for all he had done for the game and congratulated him on his outing the night before, a perfect inning with a strikeout.

Luckily, the Oakland brass came to their senses and let Barry go out as an Athletic. While he did not fare well in three appearances the last week of the season, it was the right thing to do. He even got to start a game against the Giants and former teammate, Tim Hudson.
at 9:36 PM