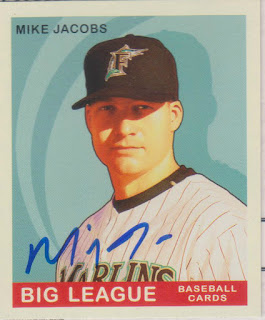 Here is the first of what is three cards from 2007 that I got signed by the former Met, Marlin, Royal, and Diamondback, Mike Jacobs. But, this is not the first Mike Jacobs card that I have posted on here. I posted the first one about four years ago and that card can be seen here.

Mike played for the Royals for one season and I got more than my fair share of cards signed by him during that year. This one is no exception as I was able to get this card signed outside of Kauffman Stadium while Mike was arriving at the park one July afternoon.

I always liked the Upper Deck made Goudey sets, even the creepy-looking finale in 2009. They had great card stock and bright card fronts that were perfect for getting autographs on. While I bought plenty of the cards from 2008 and 2009 sets, I have very few from the 2007 set. I didn't really get back into collecting cards until 2008 and I completely missed out on this set. Nearly all of the cards I have from 2007 were purchased in 2008 or later and I am pretty sure I never saw a loose pack of this set for sale. But, I can think of a few cards I have from the set, so I must have been lucky to get one in a repack box. I am assuming that is how I got this card, but it could have been sent to me or I could have purchased it from COMC.