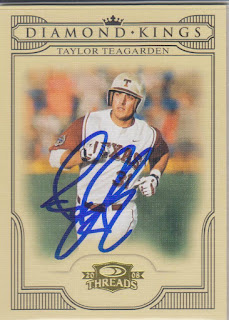 Here is the first of three cards that I got signed at a minor league game in 2010 while Taylor was playing for the Frisco RoughRiders. The RoughRiders were playing in Springdale, Arkansas that night and Taylor was the starting catcher. After the game, I went down to the Frisco dugout to see if I could snag a couple more autographs. Taylor came by and I asked him to sign. He said he would in a minute. More often than not, that response really means "No". But, Taylor went into the dugout, bagged up his gear, and then came out and signed. He signed all three cards for me that night.

Taylor was drafted in 2005, so it seems odd that he is pictured in his college uniform on this card. But, it looks like the photo might have been taken at the College World Series, which is always cool. Texas won it all in 2005. On top of that, Taylor was a member of the 2008 US Olympic baseball team that brought home the bronze in Beijing.
at 6:49 AM