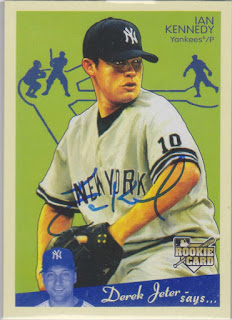 Here is a card that I got signed by Ian Kennedy at a Royals game in 2012. Ian was with the D-Backs at the time and I had a rough outing on the 'graphing front that day. As it turned out, Ian was the only guy I got. But, he did sign all three cards that I had of him, so it could have been much worse. And, considering that he was a year removed from a 21 win season, it was a good autograph to get at the time.

Fast-forward seven years later and now Ian isn't that great of a grab. After two very disappointing years in the Royals rotation, Ian has been sent to the bullpen this season. Minus the money the Royals are paying him, it is a move that I like. Last season, Ian did fairly well during his first time through the line-up. But, things weren't as good the second time around and they got even worse on the third trip through the order. So, the demotion made sense to me. As it stands right now through the Royals first twelve games of the season, Ian has been the most constant reliever in an awful bullpen. Hopefully, he can keep it up.

Speaking of Royals games, I went to one today and got to see the bullpen blow another lead en route to their tenth straight loss. On top of that, the 'graphing was nearly non-existent. The Royals open up the outfield an hour and a half before first pitch, but you cannot head down by the field until an hour prior. During the thirty minute gap, there were six Mariner pitchers on the field getting their work in. Two minutes before you could head down by the field, they all went back into the clubhouse. Booooo.

But, I was able to snag three from Royals pitching coach Cal Eldred and three from the M's starting catcher, Tom Murphy. So, it could have been worse.

This card is another example of how I somehow manage to get autographs from future Royals players.