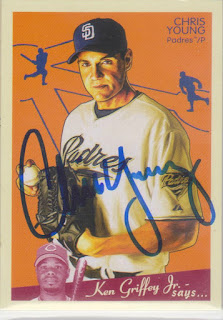 This is one of the two cards that I got signed by Chris Young at Royals Fanfest in 2017. The other card I had him sign was his 2016 Topps card that showed him celebrating the Royals World Championship, which was a must for a Royals fan. I had one other card with me that day of him, his 2008 Allen & Ginter. I asked my wife which one I should get signed and she wisely chose this one.

Chris pitched in the Majors for thirteen seasons with the Rangers, Padres, Mets, Mariners, and Royals. Over that time, he had a 79-67 record with a save and a 3.95 ERA in nearly 1300 innings of work. He appeared in the postseason twice and made one All Star team.

Chris probably had his best season during the 2007 campaign with the Padres. While his record wasn't great (9-8), he did post a 3.12 ERA and stuck out a single season best 167 batters. Coincidentally, that was the one year he made the All Star team.

While I wasn't a huge Chris Young fan during his tenure with the Royals, especially after his first season, I absolutely love his signature. It is actually readable, which is a rare trait anymore.
at 1:09 AM