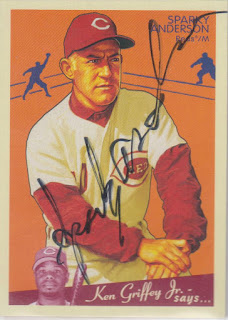 Here is the second card in the set that is a repeat post of a Hall of Famer. I first posted a card of Sparky over nine years ago and it can be seen here. That card was, of course, his '81 Donruss card. I am so glad that I got that card signed for my set. I am even more glad that I mailed it to him when I did; he passed away eight months later.

This one was obtained through the mail in 2008, two years before the '81D. But, the '81D sports a slightly better looking signature. I could just be thinking that because that one is signed in blue, though.

The Big Red Machine was before my time. Whenever I think of Sparky Anderson, I always picture him in a Tigers uniform. So, when this card came out with him as a Red, I knew I had to get it signed. The Big Red Machine might have preceded me, but I still know of their accolades and know that Sparky was at the helm.

Sparky managed in the Majors for a whopping twenty-six years, nine with the Reds and the rest with Detroit. Over that time, he had a .545 winning percentage while going to the postseason five times and winning it all three times. He was twice named manager of the year and got inducted into the Hall of Fame in 2000.
at 1:16 AM