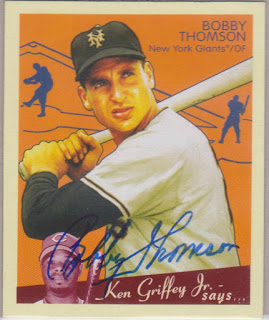 This is probably my favorite signed 2008 Goudey that I own. While I have a few cards from the set signed by some bigger names, I also have other cards signed by those guys that I enjoy more. But, this one, on the other hand, is the only card that I have signed by Bobby and I absolutely love it. Plus, the fact that it is a mini makes it that much better.

I got this card signed through the mail in November of 2008. In fact, over a four day stretch that month, I got back Bobby Doerr, Sparky Anderson, and this card, all from this set. That was a fun week of checking the mailbox.

Bobby had a fifteen year career in the Majors, playing with the Giants, Braves, Cubs, Red Sox, and Orioles. He was a .270 career hitter that racked up 264 home runs and 1,026 RBI. He made three All Star teams, had four 100 RBI seasons, played in one World Series, and hit one of the most iconic home runs in baseball history.

I didn't notice it on the Doerr or Anderson cards, but it just seems off to see Ken Griffey on the front of this card. I love that Upper Deck put Griffey and Jeter on there to replace Lou Gehrig, but it just doesn't work on cards that feature players that played before Griffey, Sr. played.
at 8:43 AM