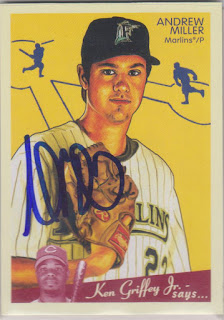 Here is card that I got signed in Kansas City last summer. Andrew was playing for Cleveland at the time and I was lucky enough to catch him as he was dropped off at the ballpark. Andrew was a total class act and signed for everybody on his way in. He signed this card and his 2018 Topps Heritage card for me.

By the time this card came out, Andrew, once a highly touted prospect, was looking like he was a bust. He was in his third season of pro ball and on his second team. Through his first two seasons, he was 5-6 with an ERA of 5.69 while walking 49 and striking out 62 in 74.1 innings of work with Detroit. Things didn't get any better in Miami. In his first season with the Marlins, he was 6-10 with a 5.87 ERA. It was more of the same in 2009 and he then spent most of 2010 in the minor leagues.

The Marlins then flipped him to Boston for Dustin Richardson and it was more of the same in 2011 with the Sox. Then, in 2012, Boston moved Andrew to the bullpen full time and things started to click. Used as a LOOGY that first year in the pen, Andrew posted a 3.35 ERA over 40.1 innings. In 2013, he had his first season of more than a strikeout an inning. In 2014, he had his first 100 strikeout season and did it in just 62.1 innings.

During that 2014 campaign, Andrew got dealt to the Orioles at the trade deadline. The O's went on to the postseason that year and that was the first of five straight years of him pitching in the playoffs. He pitched for the Yankees in 2015 and then the Indians for the last three years.

Andrew signed with the Cardinals during the off-season and is off to a rocky start. In just 3.1 innings of work in five games, he is 0-1 with a 10.80 ERA. It is still early, so hopefully he can get it going soon.

I absolutely love this set and I was thrilled to get a card from it signed by a current player last season. There are not too many guys from this set still playing, so it is always fun when I am able to add to it.
at 1:08 AM